The Taylor Brook deposit is classified as a polymetallic VMS deposit typical of the Bathurst Mining Camp. The deposit is comprised of one to four stratabound horizons of heavily disseminated to semi-massive and massive sulphides with a strike length of approximately 650 metres and a down-dip extent of greater than 600 metres. The Taylor Brook deposit is situated approximately six kilometres along strike and northeast of Trevali Mining Corporation’s Stratmat project and is believed to host mineralization similar to that identified at the Stratmat deposit. The northeast trending Stratmat Shear Zone, which encompasses the Stratmat deposit, appears to be trending onto the Taylor Brook Property. This shear zone is truncated to the north by the Coles Brook Fault that can be mapped on the Taylor Brook Property.

The Taylor Brook deposit appears to have a nucleus of higher-grade massive sulphides concentrated in the northeast area of the Property. Sphalerite and galena are the dominant economic minerals and the width and grades of the base metal mineralization are highly variable within the sulphide zone although several narrow high grade intervals (e.g. 1.0 m. of 10.7% Zn, 2.2% Pb and 5.2 oz/ton Ag in Hole TB95-2) have been encountered. The lead, zinc, and copper ratios are consistent with those from other deposits in the Bathurst Mining Camp. The eastern portion of the Taylor Brook deposit has been drilled to shallow depths and has not been delineated to the east or west nor at depth and remains open.

The Taylor Brook Deposit and volcanogenic massive sulphide horizon has been explored by Stratabound Minerals Corp since 1987.

In 1977, Consolidated Morrison conducted an input airborne geophysical survey that identified a coincident EM and magnetic anomaly. Diamond drilling intersected the Taylor Brook base metal sulphide deposit. Follow up drilling by Sabina (1978) and Granges (1986) expanded the deposit but failed to intersect significant grades of zinc and lead.

Stratabound Minerals Corp. acquired the exploration rights to the property by entering into an option agreement in 1988. The historical exploration work was compiled and a new exploration initiative was begun. The program included line cutting, prospecting, horizontal loop EM, magnetic and extensive Induced Polarization (Dipole-Dipole resistivity) surveys. A trenching program was undertaken in the summer and lead to the delineation of a broad area of base metal sulphide mineralization near surface at the western end of the known mineralized horizon. This was interpreted to be a complex re-folded structure that may hold potential for increased grade. Teck Exploration Ltd optioned the property in 1991 and completed geological mapping and lithogeochemical surveys. Two drill holes were added to test the depth extent of the original deposit and yielded disappointing results.

In 2011, Stratabound Minerals commissioned Tetra Tech Wardrop to complete a Preliminary Economic Assessment (PEA) and Resource Estimates on their 100% owned Captain, CNE and Taylor Brook Deposits. Tetra Tech concluded that the Taylor Brook deposit warrants further investigation and development. Tetra Tech recommended that additional drilling be conducted to further investigate and develop the known Taylor Brook deposit. The deposit has not been delineated laterally to the northwest/west. The deposit requires additional work to determine if the continuity of geology and grade continue at depth and laterally to the east. Tetra Tech recommended a definition drill program of approximately 2,900 m.

Jaeger Resources Corp. optioned the property (claim 1839) from Stratabound in 2017 and initiated exploration.

A new grid was cut in 2018 in in anticipation that a major IP conductor exists along a westerly trend.

An exploration program consisting of Horizontal Loop Electromagmetic (HLEM) geophysical survey was conducted in 2020 to follow up on the VLF and magnetometer surveys (2019, 2020) which outlined some anomalous areas of interest. The Taylor Brook deposit was also surveyed. The VLF, magnetometer and HLEM data were sent to a geophysical consultant for interpretations. Additional HLEM survey work was also conducted in 2022.

“The drill holes (mineralized area) appear to flank a magnetic anomaly. Strong VLF-EM and HLEM anomalies are also associated with the mineralized area. Based on these results, further target areas can be based on the initial VLF surveys and should be followed up with HLEM (MaxMin)”. A favourable geological setting together with results of the work done to date show that the property has the potential for additional drill untested geophysical targets.

Lithogeochemical and geometallurgical studies were carried out in 2019 , 2020 and 2021, which are important for understanding the geology, mineralization, waste rock and tailings components of any deposit and their impact on the environment and reclamation. This program also has the potential for discovering and locating additional mineralization on the property for follow up drilling.

A preliminary geometallurgical study was initiated in 2019 to examine the mineralogy and lithogeochemistry of the Taylor Brook Property.

A preliminary to any mineral processing study must include a mineralogical and lithogeochemical study with emphasis on trace element geochemistry. This study is important for understanding the ore, waste rock and tailings components of any deposit and their impact on the environment. This would include reclamation.

The level of detail from this investigation should increase as the project advances through the various stages of development.

The purpose of this study is as follows:

Highlights of the study include the following preliminary interpretations:

As part of this study, re-sampling of historic diamond drill core of the Taylor Brook Deposit stored at the Madran core facility was carried out. Selected outcrops were also sampled on a newly established cut grid.

With this kind of geometallurgical information at the exploration stage, the Company can begin to fine-tune any future mineral processing systems.

Jaeger Resources Corp ("Jaeger") entered into an option agreement with Stratabound Minerals Corp ("Stratabound") in 2017 (see press release dated February 22, 2017) to earn an 80% interest in 34 of the Taylor Brook Property claims through exploration expenditures, the assumption of Stratabound's work and payment obligations relative to the Taylor Brook claims and the issuance to Stratabound of shares of Jaeger. Under the terms of the agreement Jaeger issued 1,000,000 common shares to Stratabound upon execution of the agreement, an additional 1,000,000 common shares issued to Stratabound on the one-year anniversary of the agreement and Jaeger is required to incur cumulative exploration expenditures of $500,000 over a three-year period (amended to a 6 year period as stated below). To date (November, 2019), Jaeger has expended $125,000 on exploration.

The global pandemic COVID-19 has resulted in unprecedented shutdowns, with the government of New Brunswick waiving the work requirements for the 2020 period, and by extending all active claims for a period of one year. As a result of Covid-19, Stratabound and Jaeger have agreed to modify the terms of the Option to extend the dates in the Amended Option by one year. This agreement replaces the 2019 Amended Option.

Located in the Bathurst Mining District, Northumberland County, New Brunswick, approximately 45 kilometres  southwest of the city of Bathurst which has a well-developed mining infrastructure and a skilled workforce.

Property is accessed via Highway 403 and/or the Taylor Brook Road. There are several unpaved logging roads that allow easy access to various areas on the Property.

The Taylor Brook Property consists of 34 contiguous optioned claims encompassing 748 hectares and 36 contiguous claims staked by Jaeger encompassing 792 hectares The surface rights are designated as Crown Land and are held by the Provincial Government. Jaeger holds the required Notice of Planned Work permit needed to carry out the  Company’s proposed work program on the Property. 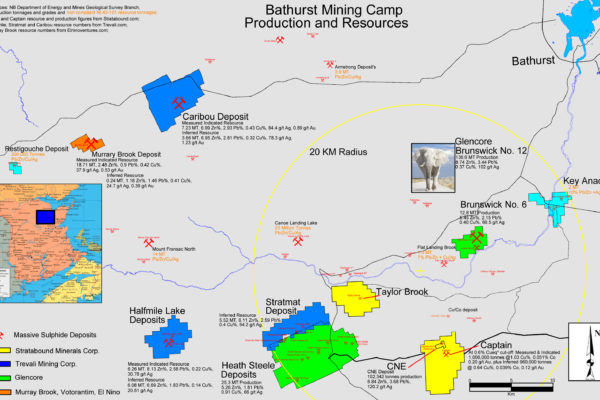 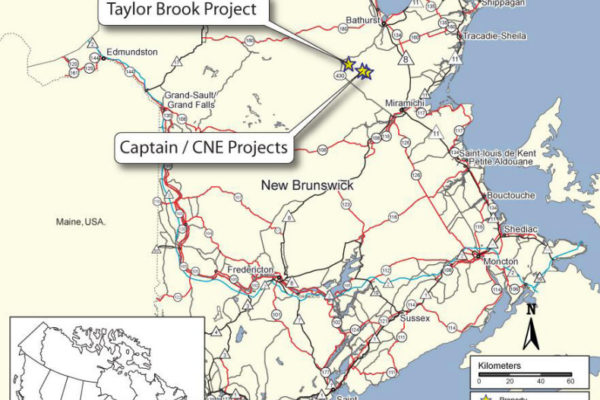 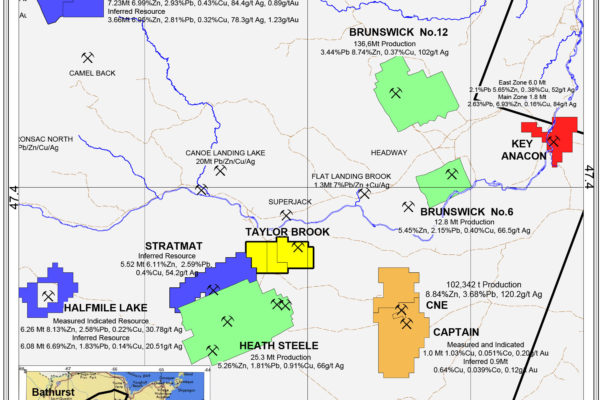 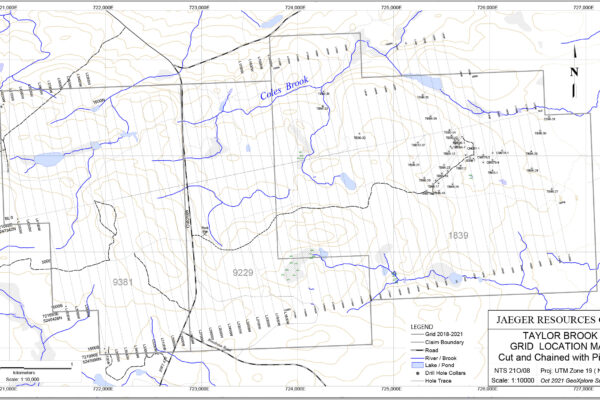 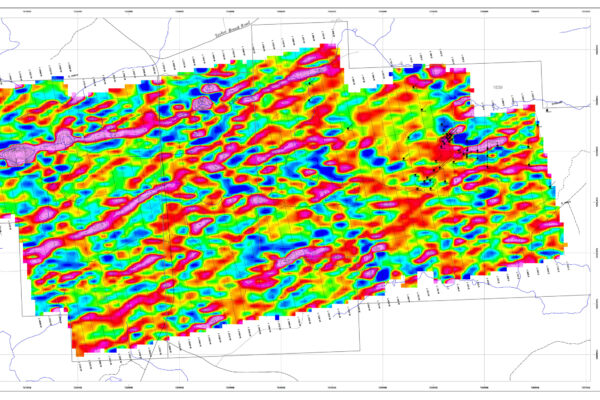 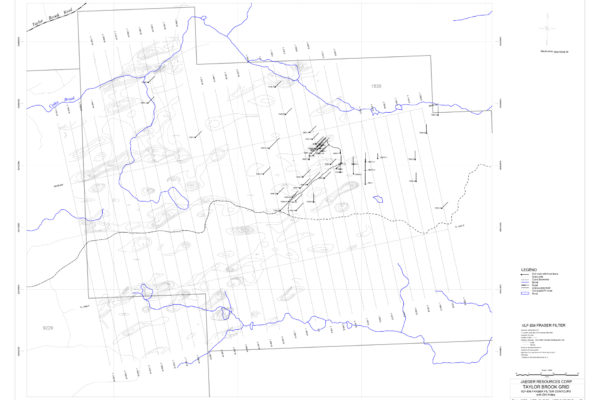 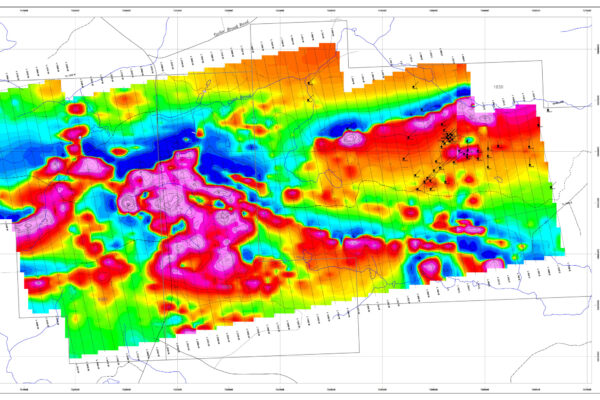 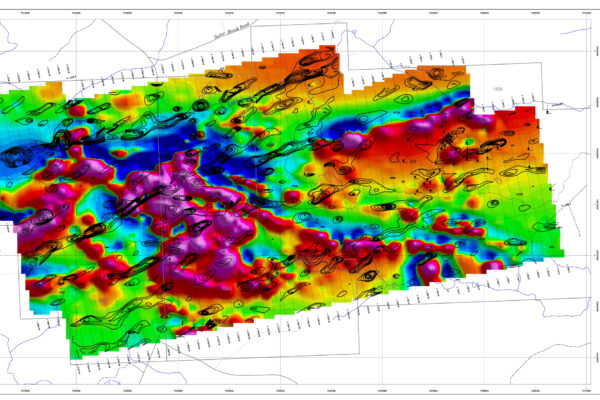 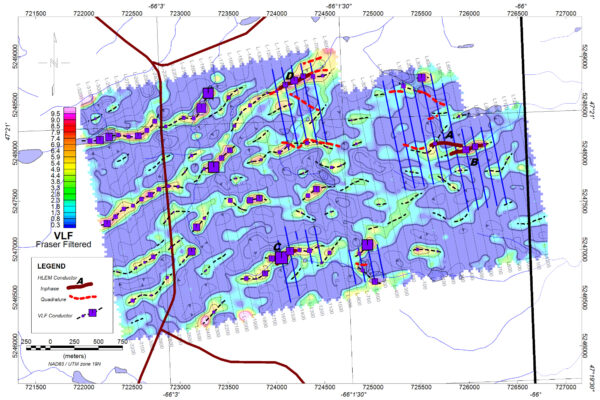 VLF-EM Fraser Filter Map (Bingham, 2020). The blue grid lines denote the areas of the HLEM surveys. Areas A and B cover the Taylor Brook Deposit 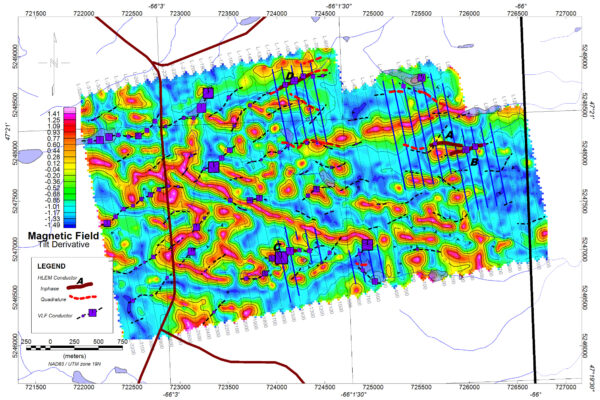 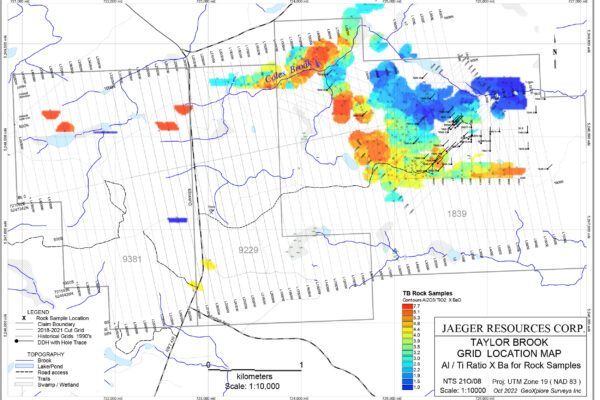 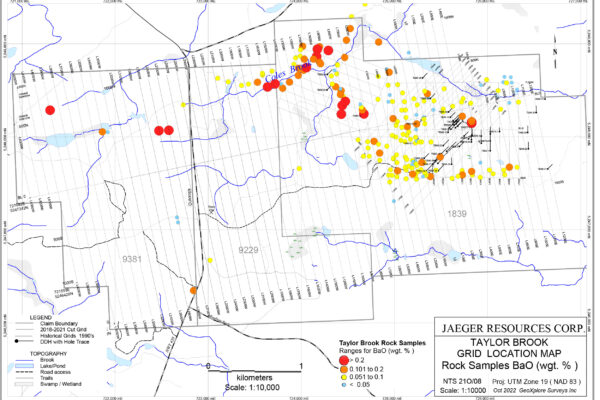 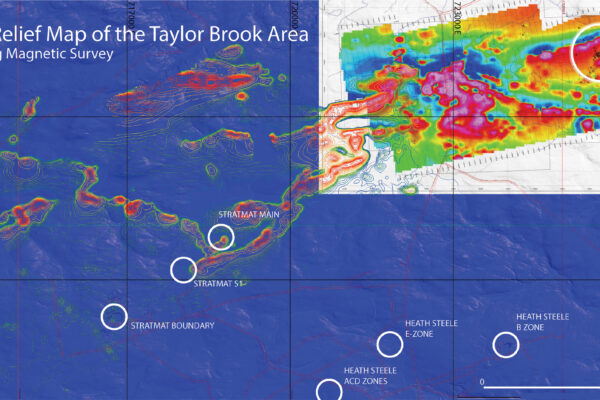 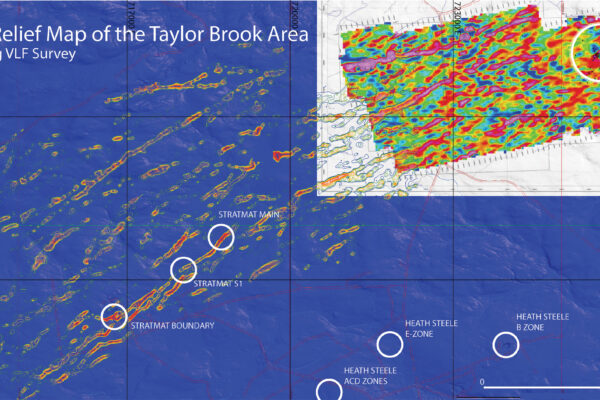 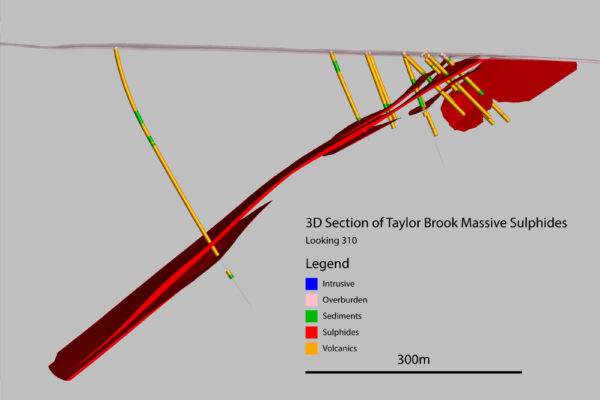 This preliminary model of the Taylor Brook Deposit indicates an antiformal shape with several sub-parallel lenses of massive to semi-massive sulphides that may be a result of tight Z type folding and / or structural repetition of lithological units reflecting a combination of folding episodes as well as possible stacking by thrusting. 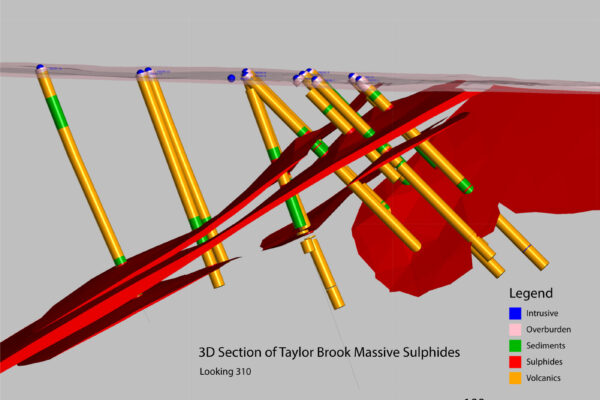 This model indicates the presence of near surface mineralization which may be amenable to open pit development. 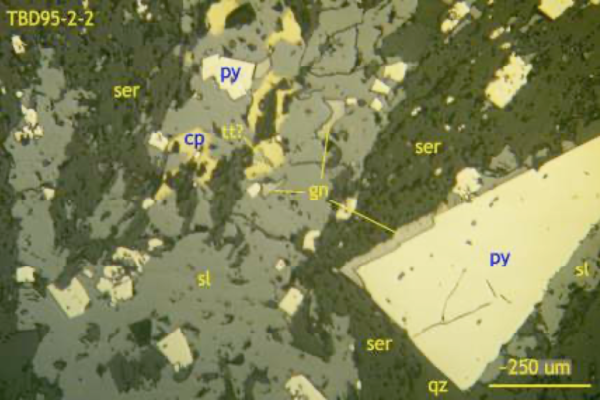 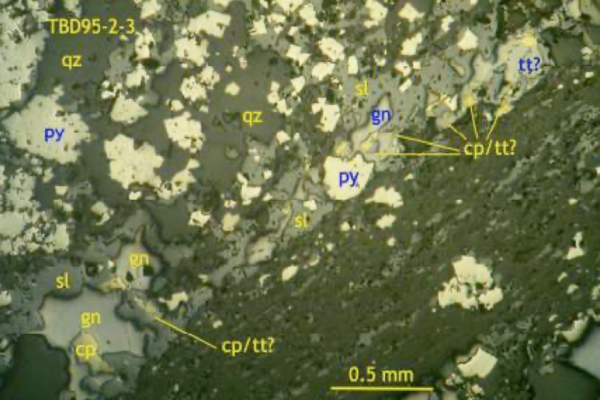 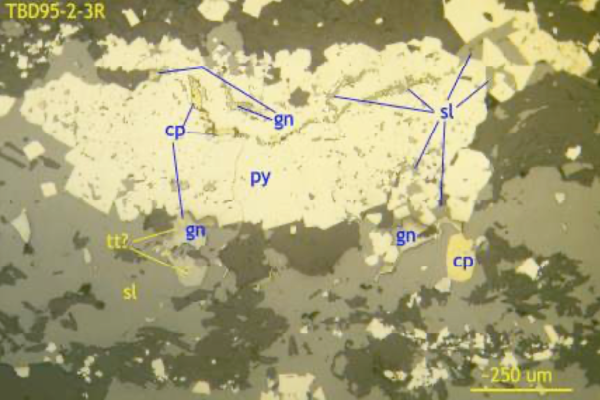 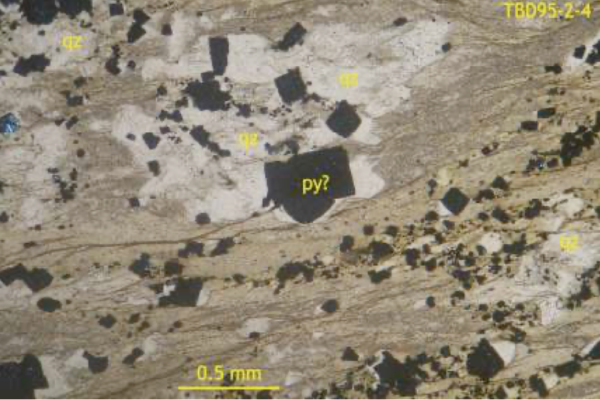 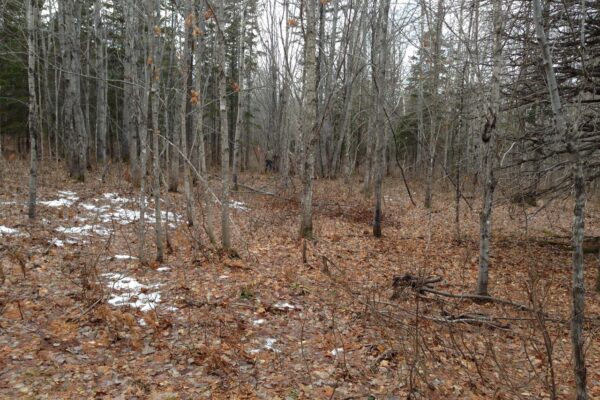 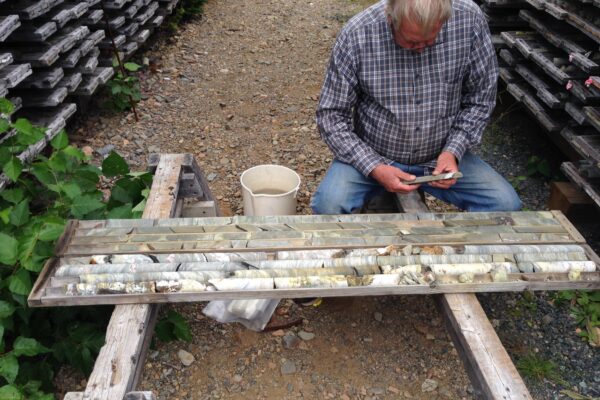